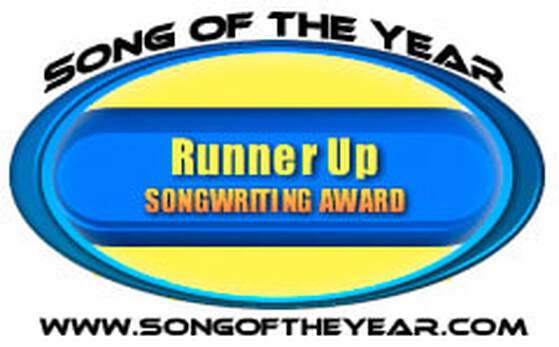 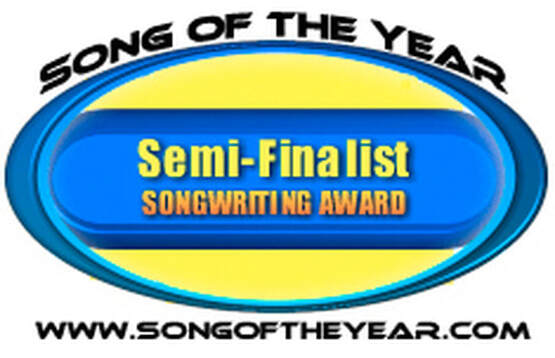 "More information at www.amyhindman.com"
​Song of the Year 2017
Amy Hindman 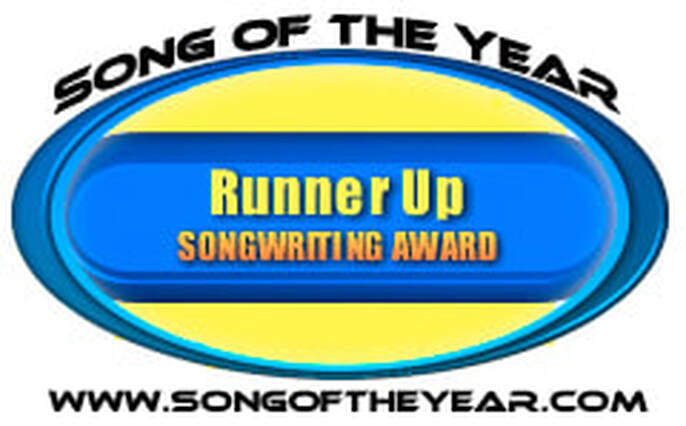 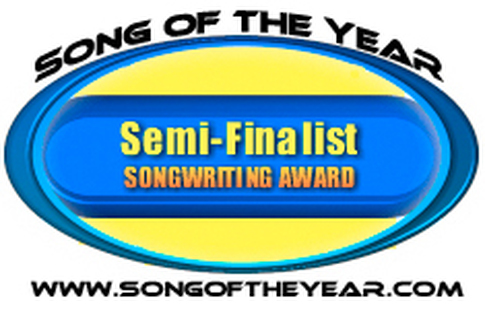 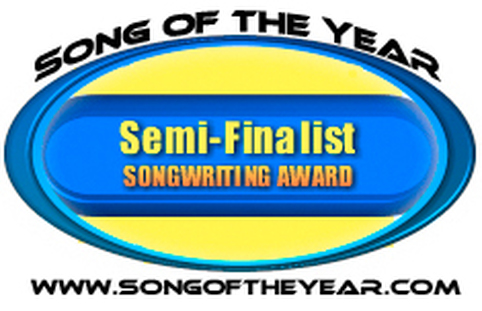 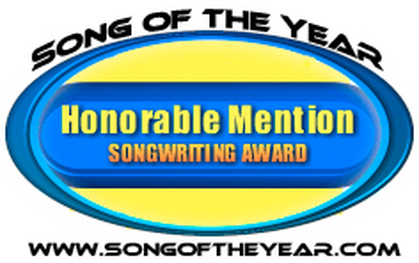 “More information at www.amyhindman.com“
‘This is a beautiful song, sensitively and melodiously sung. May it touch millions of hearts around the world.’
Arun Gandhi, Grandson of Mahatma Gandhi

"Gandhi and King: Becoming the Dream"
Won an "Honorable Mention" in Song of the Year, 2012
Worldwide Songwriting Competition

"In My Waking Dream"
Semi-Finalist Award! Song of the Year 2016 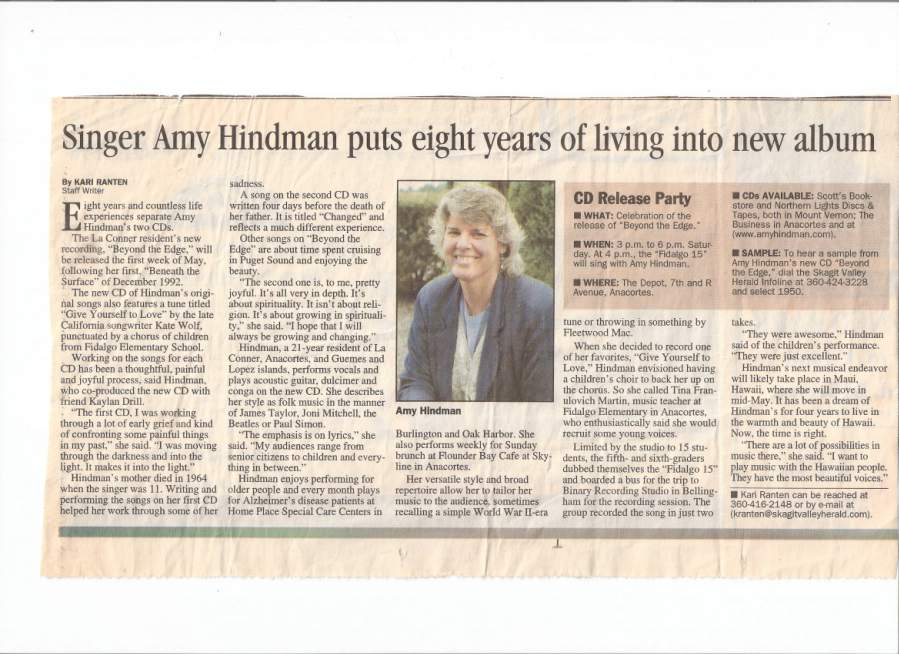 Amy Hindman to Release Third CD: In My Waking Dream

Amy says of that time: “I was so drawn to La Conner and really felt I was home.  I had a house to move into in March of that year.”  (Incidentally, in 1979, La Conner’s police cars were Le Car’s!!) Below is one of the original La Conner Le Car's with our present Mayor of La Conner at the wheel :) 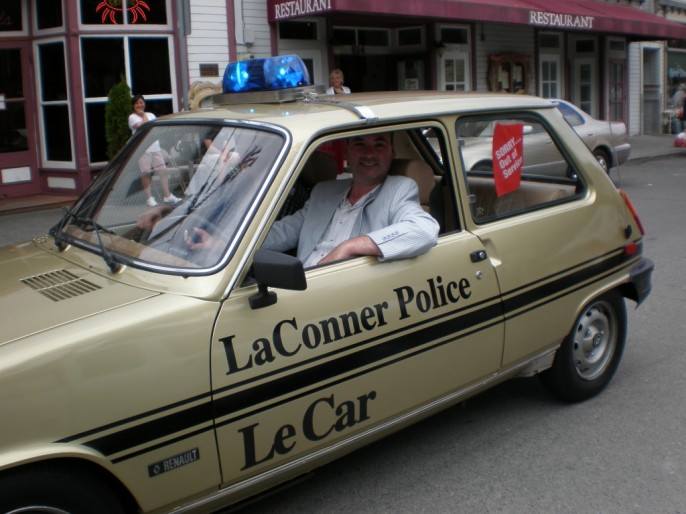 She had graduated from Whitworth College with a BA in English and a minor in “The American Experience”, a study of sociology, philosophy and history, as well as a secondary teaching degree.  In 1975, there were tons of English majors entering the teaching field, and Amy had an interview to teach English in the very small community of Prosser, Washington, where there were 400 applicants for one job!  She was one of 4 interviewed, and didn’t get the job.  The retiring teacher was very disappointed that Amy had not been hired to take his position.  Amy was a little disappointed, and also relieved, as this gave her a clear sign to return to Spokane and pursue her music and other passions.

When she released her 1st Album, back in 1992, she received a phone call from Dorothy Ives, who had been given her recording by Laura Burton, of Burton Jewelers in Anacortes, inviting her to sing with the infamous Burl Ives.  Dorothy said “Your voice is beautiful!  Would you like to sing with Burl?”  Dorothy did not know that the invitation came on Amy’s 40th birthday, while living in her log cabin on Guemes Island, her home for 6 years.

Singing with Burl Ives and Company “On the Old Front Porch” has been one of the highlights of her life, she says.  The two concerts were at Skagit Valley
College in 1993, with an audience of 2000 people, a Benefit for the Skagit Enhancement Foundation, and Amy sang a solo for each concert, one of the songs being “Puget Symphony”.  Randy Sparks, who started the “The New Christy Minstrels”, was part of the concert, and the MC was Angie Dickinson, who introduced Amy to the audience.

In 1966, they were living in Denton, Texas, and shortly after Amy’s mother died of cancer (when she was 11), her family and new stepmother, Billie, moved to Bangkok, Thailand for 3 years.

Amy is the youngest of five, and has had a very “colorful” life, as she describes it: not dull at all.  Her brothers and sisters are talented musicians, actors, writers, teachers and quilters?? (Amy didn’t get THAT gene, & says at 5 years of age she was playing with her grandmother’s sewing machine and proceeded to put the needle right through her thumb).  She says she knew then, that sewing and homemaking wasn’t to be her area:  sometimes you just know.

Amy’s first 2 CD’s (Beneath the Surface, 1992, and Beyond the Edge, 2000), were recorded at Binary Recording Studio in Bellingham, and the new one was recorded in her own garage studio, here in Shelter Bay, La Conner.  The studio was built by local angels, Ralph Westover, Ken Kraemer, Richard Mattrass, and Lance, Amy’s neighbor. The final mixing was done with Phil Heaven at Soundings of the Planet in Bellingham.

The Album contains 11 songs, 6 of which are originals.  Some of these original songs are all written about our beautiful area:
Puget Symphony
A Kalaloch Song
Seattle Blues / Island Hues
Song of the Earth
Amy plans, after the CD is released, to start work immediately on her 4th CD, entitled “Moon of Listening Woman”.  The songs are already written.  Her future plans are to work on writing her book about her life experiences.

The In My Waking Dream Album Release Party is scheduled for August 17th, 2013, Saturday from 1-4 at the Shelter Bay Clubhouse in La Conner.  Live Music is at 2:00 (with some of the studio musicians). Admission is free, all are invited, and CD’s will be available at that time.

If you want to catch Amy playing music at some local venues, these are some upcoming dates: 2013